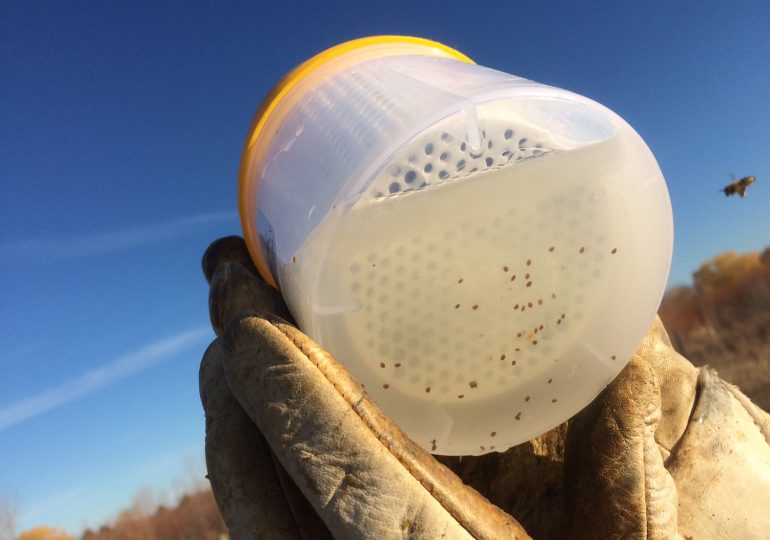 Why should I monitor my hives since I always treat my colonies at the same time of year, usually at the end of the season?

ASSESS THE EFFICACY OF YOUR MITE TREATMENT

We must measure the varroa infestation inside our hives before and after treatment to assess our treatment’s correct efficacy.

Your goal should be achieving a high efficacy of treatment, at least 95%*, which is a good minimum expected percentage kill for a varroa treatment. However, if your initial mite load was too high (i.e. 10,000 varroa mites per colony) then based on the efficacy percentage, we should expect a high number of live mites remaining in the hive, at treatment’s end. This number is high, and these remaining populations of mites would not guarantee successful overwintering colony survival.

If you count only these residual mites the treatment was not adequately effective, due to the high initial mite load. Though the treatment did fulfill its role and would have been more effective if the initial mite loads were lower. A high initial mite count prior to treatment (say 5-6 mites per 100 bees), would indicate to the beekeeper that post-treatment monitoring is clearly called for, and to evaluate conditions at that time. Therefore, we cannot base our judgment solely on the success of the treatment, but we must also take into consideration that the initial number of mites will play a role in final efficacy. Post-treatment monitoring will guide you in evaluating the success of your treatment.

Hence a large infestation of varroa mites prior to treatment, along with post-treatment monitoring, may indicate that a complementary treatment during the winter months (along with a winter brood-break) will be necessary for increased overwintering success. These actions aid in guaranteeing a sufficiently low level of mite infestation entering the spring build-up period.

A YEAR WITH A HIGH MITE LOAD, AND ITS POTENTIAL CONSEQUENCES

Varroa infestation varies from year to year. We can easily conclude that a fixed schedule of treatment will not suit every beekeeper by observing the graph below. Therefore, we must adapt our treatment strategy according to the mite monitoring we performed during the year.

Infestation variations in the same apiary in France (Alsace region), between 2010 and 2014

A threshold of 3200 to 4200 varroa mites has been described in the literature as being an infestation level (during the beekeeping season) which will lead to an economic loss for the beekeeper (low production and high mortality risk).

We can quickly see on this graph that the year 2011 was particularly dangerous, as 74% of the hives were above the economic thresholds during most of the season. Thus, we can conclude that we would not expect the same number of residual varroa mites at the end of the 2011 treatment compared to the other years, because the initial infestation was far greater. This is the reason why mite management should always be adapted from one year to another. It is easy to understand that the practice of “only one treatment, at the end of the season” may not be successful. Each year shows significant variability, and thus indicates that it is essential to adapt a strategy as guided by monitoring mite loads.

As a reminder, the varroa mite impact is not limited to colony health, but also impacts productivity. A study conducted on lavender honey flow in the south of France showed that a phoretic infestation of 3% (9 mites in a sample of 300 bees) during the season reduced honey production by an average, for some hives, of 11 pounds, up to 28 pounds.

Reference: Maisonnasse, et al., 2014. A study conducted by INRA found that a 3% Varroa infestation cut honey production by 11 lbs. of lavender honey per flow, or as much as 28 lbs. per year.

We know that mite infestations can vary inside even one apiary. A single hive can contain ten times more varroa mites than the least infested hive. Thus, in apiaries with a small number of hives, all hives should be monitored. These hives with high mite infestations can be a source of mite re-infestations post-treatment and could endanger the survival of other colonies in the apiary as time moves forward. Post monitoring may indicate that quick secondary treatment may be required of some colonies.

Infestation variations within the same apiary at the end of the 2014 season
(year with high infestation), in Chaillac (France)

Source: Data from the Véto-pharma apiary in 2014 in Chaillac (France) – Total average infestation of each hive recorded after a 10-week conventional varroa mite treatment, followed by a control treatment.