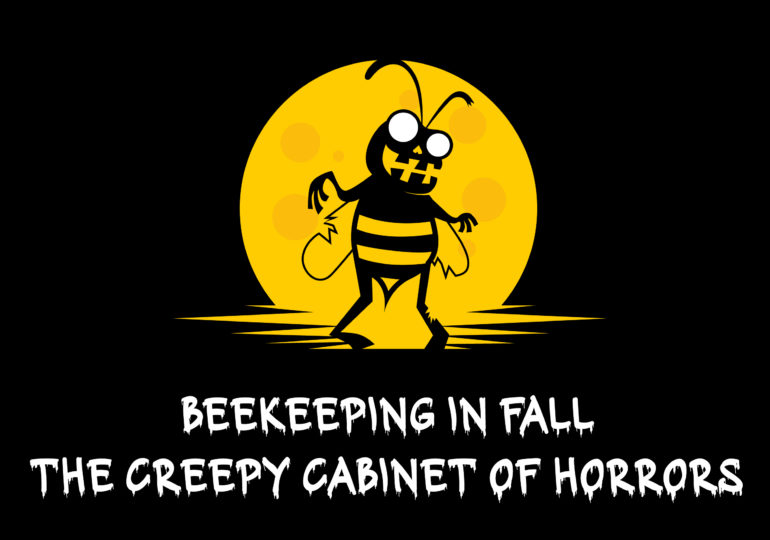 Are you scared of Frankenstein, the Slender Man or Chucky the Killer Doll? Do you shut your window blinds every year on the last day of October, not because you’re out of candy, but because you were never one to enjoy the eerie feeling of suspense and horror creeping up your neck? If you’re not a fan of trick-or-treating, or of scary creatures, beekeeping in fall could be a real challenge for you in some years.

While little kids are thinking about candy, many of our honey bee colonies are concerned with something much more elementary: survival.

Possibly the biggest, but for sure one of the more preventable creatures you can cross paths with during late fall are mice. If not blocked from entering the hive with a mouse guard at the entrance in October, these furry monsters will destroy comb and damage your equipment. As if that wasn’t scary enough, the disturbance these rodents can cause in the colony may prevent bees from staying in the cluster, eventually causing them to die a freezing death. What’s more, the scent of urine and droppings of the big, hairy scavengers in their home is so repulsive to them, it may lead your bees to a terrible last Kamikaze mission of departing the hives into the cold…

… Leading us directly to the next devastating fall horror that beekeepers fear even more than the absence of a queen: Absconding. While you may very well find a good Samaritan amongst your fellow beekeepers who can provide you with a mated queen in fall (if you do not have one readily available yourself), chances are that an absconded colony will not survive the winter. The only good news in this bleak scenario is that, just like when bees prepare to swarm in spring, they send you signs of despair before they take off to their last departure. The queen stops laying eggs a few days prior, bees stop feeding and are slimming down before taking on their last journey, and scouts are flying out to scan the surroundings for a desperate chance of survival in a new home. Of course, absconding is otherwise very different from swarming in two deadly ways: It is motivated by fear of surviving, not by the instinct to reproduce, and all bees vacate the hive when absconding, mostly into a cold, hostile environment. If you are asking yourself why some bee colonies flee their hives like you would bolt out of the scariest haunted house imaginable, here are a few clues of what may cause them to depart: Disruption by wild animals, an overly motivated beekeeper opening hives too frequently or too roughly, attacks from predators or high pressure from pests in the hive, poor ventilation of the hive or a shortage of nutritional resources…

… which brings us to another spooky example of potential traps in fall beekeeping that, unfortunately, is just as widespread as it is devastating: Starvation. From dearth in summer to unfavorable weather conditions for collecting nectar to Nosema to misjudgment on the beekeeper’s part: providing too little, too late, or the wrong type of feed too late in the season – all of the above can cause the haunting scenery of starvation in honey bee colonies. Dwindling clusters, creepily undersized worker bees or aggressive fights and robbing in the bee yard are some of the potential signs of starvation in fall. Perhaps the most unsettling sight of all, bees eating their own larvae is a clear indication that the colony is struggling for survival, as one of the most unnatural and counter-intuitive behaviors has settled amongst the doomed. And, once the wheel of death has been set in motion, in can be difficult to save the bees, especially when outside temperatures have already decreased significantly, once the grave situation is uncovered by the beekeeper.

Now, let’s focus on the super villain, the most obvious, and easily most terrible, devastating horror of beekeeping in fall… parasitic mite syndrome (PMS). Unquestionably, varroa mites offer the picture-perfect stereotype of scary Halloween monsters… just looking at them could make any beekeepers blood freeze instantly. There is also no doubt that varroa mites pose a threat year-round, and fall is really just one of four seasons that includes varroa management in honey bee hives. However, there is an especially gruesome, most despicable element to the impact that mites can have on beekeeping operations in fall. After all, winter is just lurking around the corner, and the demise of the colonies due to PMS is usually quick – making it so much worse. Some of the PMS syndromes are ambiguous:  Reduced adult bee population, for example, is never a good sign – be it as a symptom of PMS, starvation or for any other reason. Then there is spotted brood, next to high varroa numbers in the colony, universally acknowledged as one of the tell-tale signs of this particular horror story that is co-authored by Varroa destructor and various bee viruses that the mite transmits. Brood symptoms will get more obvious, the closer the affected colonies move towards collapse: White-greyish larvae, sunken in, curled up or twisted larvae… pupae that are chewed on or removed. The range of horrific sights and symptoms is manifold when PMS is present, and there is potential for overlap or confusion with other conditions, like European foulbrood, but the larvae do not rope out. Wanna prevent your colonies from living through this real-life, in-hive horror story? Monitoring throughout the season as well as a well thought out , IPM-based varroa treatment plan with backups can help prevent this morbid scenario playing out in your hives. Timely feeding, as well as preventive measures against robbing – and thus potential mite re-infestation in your apiaries – provides a good basis for protection against PMS.

At last, I am serving you an ice-cold horror that will make the hairs on the back of your neck stand up: chilled brood. No, we’re not talking about the virus-based mummy of beekeeping, chalkbrood, here. Instead, chilled brood is the result of bee brood remaining unprotected from the cold or, in other words, not enough adult worker bees being available to cover the brood. Some say, it can also be associated with too long-lasting and intrusive hive inspections when decreased outside temperatures really call for a brief check-up only. As a result, larger areas of brood will often die and turn black after a while… symbolic of the dark surprises that beekeeping at this time of the season can reveal.

In light of this (incomplete) cabinet of horrors of beekeeping in fall, it should be obvious by now that beekeeping is not an endeavor for the faint hearted. Especially for beginners, hive management in fall can pose a big challenge that can appear like something straight out of hell. However, taking on the challenge, preparing thoroughly for the fight against evil creatures and dark powers, and planning ahead for potential traps and pitfalls ahead of time, can dissolve the element of surprise like already knowing the movie preview to the upcoming splatter film in your local movie theatre. 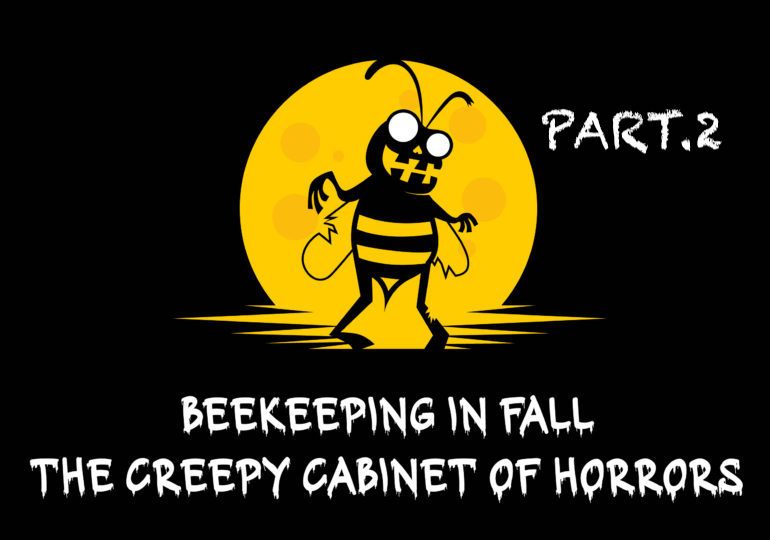 Trick or Treat? It’s that time of the year again: the dark season has arrived. Let’s share some terrible stories about monsters and evil creatures in honey bee colonie…