Many of you are looking for tips to optimize the efficacy of your mite treatments, especially when facing a high mite load before treatment. Here you will learn a simple tip, validated by two field studies, allowing you to boost your Apivar treatment efficacy.

Let’s get back to the basics: Apivar is an amitraz-based varroa treatment working by contact. The more bees get in contact with the strips, the more amitraz they will collect from the surface of the strips. That is why the strips always need to be placed in the center of the brood: this is where we can observe the highest activity in the hive, resulting in the highest number of potential contacts, and it’s also here that varroa mites will merge from the brood cells.

During a long action treatment like Apivar (6 to 8 weeks), it is not rare to see the strips covered by wax and propolis after several weeks. However, the propolis/wax will decrease the accessible surface on the strips for bees and therefore reduce the number of potential contacts. Moreover, after a few weeks, the bees’ cluster may have moved a little bit within the brood box. Thus, during your visits at your apiaries, we advise scraping the strips systematically at mid-treatment (with a hive-tool) and repositioning them at the center of the bee cluster. 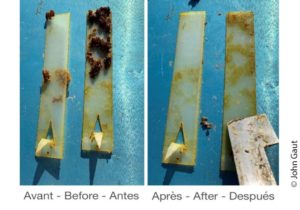 Can we really see the difference by scraping and repositioning the strips? Yes, two efficacy studies with Apivar indicate a significant positive effect on the treatment efficacy.

The first study was conducted by the ADAPI (French association for the development of beekeeping) between 2008 and 2010.1 They have compared colonies with scraping and repositioning of the strips to other colonies in which strips were neither scraped nor repositioned. In conclusion, they have observed a difference from 1 to 4 percent in treatment efficacy between the two groups.

Figure 1: Compared efficacy of Apivar with and without scraping and repositioning the Apivar strips mid-treatment. Data collected in France between 2008 and 2010.

The second, more recent study has been conducted in Germany, in two different apiaries in Kirchheim and Hohenheim.2 On each site, researchers have measured the average daily varroa mite falls of 10 colonies, from the beginning until the end of the Apivar treatment period.
The researchers applied the strips on the 24th of July (the usual treatment period for many German beekeepers after the summer honey flow, where you can observe a peak in fallen mites (see Figure 2). Then, they scraped and repositioned the strips on the 24th of August (Kirchheim) and the 5th of September (Hohenheim), around the mid-treatment, where you can observe a second peak with significant daily mite falls (see Figure 2).

Figure 2: Compared efficacy of Apivar with and without scraping and repositioning the Apivar strips mid-treatment. Data collected in Germany in 2018.

We can conclude from these two studies that the systematic scraping at mid-treatment (and eventually repositioning if necessary) increases the bee’s direct contact with the strips, and in turn optimizes the overall efficacy of the treatment.
—

It is essential to understand each varroa treatment’s mode of action to identify the factors that will influence its efficacy. An evaporation treatment will be influenced by the temperature, ventilation of the hive, and air humidity. A treatment working by contact will be influenced by number of direct contacts between the product and the bees. Even though the scraping and repositioning are additional manipulations, they can be included during a hive visit easily, and they make a noticeable difference in the final treatment efficacy. Think about it for your next treatments! 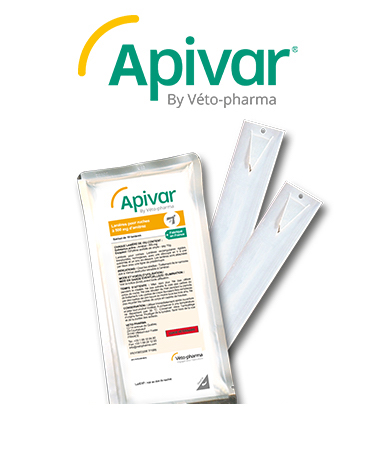