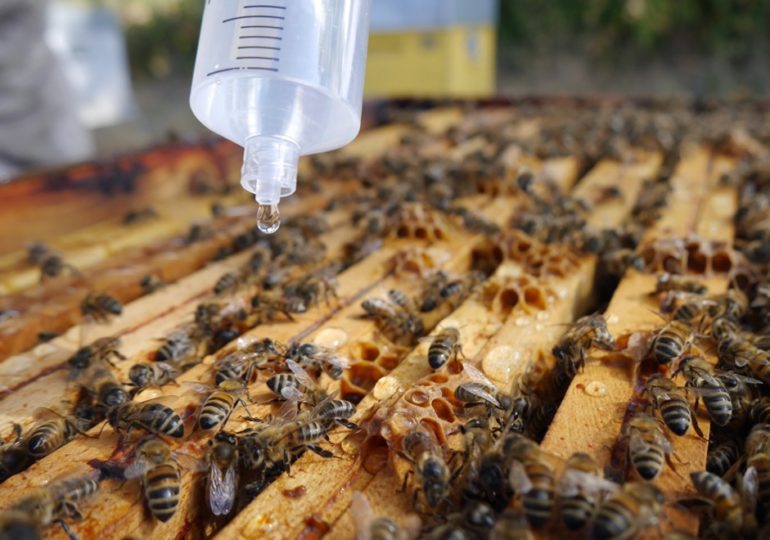 We tried it: Takeaways from a field efficacy trial in Spain.

If you are wondering whether you could treat your colonies with oxalic acid during the season, how it works, and which product to use, take a look at the results of a recent field efficacy test, conducted in Spain (2021).

Beekeepers commonly use oxalic acid as a winter treatment against varroa mites (Varroa destructor) in regions with a natural brood break when bees form a winter cluster in the hive. Trickling liquid oxalic acid solution during the brood-free period is a well-known and established practice in European countries with a suitable climate. The application of oxalic acid in colonies with brood present is not recommended, because oxalic acid is only efficient on mites that are attached to adult bees. Varroa mites in the capped bee brood cannot be reached by an oxalic acid treatment.1 Existing research on this subject suggests that repeated treatments with oxalic acid (by trickling) may have some damaging effects on the bee brood and larvae.2 Other studies suggest that repeated sublimation of oxalic acid (where authorized) is not effective enough, even after 3-4 or more applications.3-4

Therefore, creating an artificial brood break in the colonies is the method of choice for beekeepers who would like to treat with oxalic acid during the season (in spring or summer). The queen-caging method is well-known and researched, mainly in Italy. But it has received some more attention globally in recent years, since the popularity of oxalic acid treatments has increased in Europe and North America.

In 2021, apiADS and Véto-pharma worked together to set up a field efficacy test in the Valencia region in Spain, testing three authorized oxalic acid-based varroa treatments: VarroMed, Oxybee and Api-bioxal. The main objectives of this trial were to:

1) Test the efficacy of all three oxalic-based products as summer treatments. Following the label recommendations, this meant brood-free hives after queen caging for Oxybee and Api-bioxal. For VarroMed, several applications with brood present in the colonies are possible, following the product’s technical data sheet. Thus, three applications of VarroMed were tested here in accordance with the recommendation for summer / autumn treatments.

2) To record possible side effects (worker bee mortality, effects on brood and population strength) of all tested products.

Each of the three varroa treatments tested was applied on seven honeybee colonies in July 2021. All products were used in compliance with the label instructions, and all were tested on Langstroth hives.

VarroMed, is the only one of the three varroa treatments tested here with an authorization for repeated applications. Thus, caging the queens was not necessary in this testing group. VarroMed was applied three times, with the last application being timed on the same day as the applications of Api-bioxal and Oxybee. In these two testing groups, the queens were caged 25 days before the application of the treatment. In all three groups, the follow-up control treatment (Apivar) was applied 14 days after the respective oxalic acid treatment. Apivar strips remained in the colonies for 42 days.

The natural varroa mite fall was observed on sticky boards before the application of oxalic acid; the mite fall during the treatment period and control treatment was recorded as well.

The elevated mite fall in the VarroMed-group is visible after the first two applications in Figure 1, just as the significantly higher peaks of the Api-bioxal and Oxybee groups after Day 0.

Comparing the scope of possible side effects in all three treatments groups, the focus was on daily worker bee mortality (Figure 3), no. of frames of brood (Figure 4), and no. of frames covered with bees (Figure 5).

Due to low sample size (two hives per group counted), we were unable to perform a statistical test on the worker bee mortality to compare all three varroa products. The number of dead worker bees detected for each of the three treatments per day is illustrated below in Figure 3.

Due to the different methodology used in the VarroMed-group (no queen caging, 3x applications) compared with the Api-bioxal and Oxybee-groups (queen caging, 1x application), the first counting of brood combs in the VarroMed-group was conducted 11 days later – right before the first application. However, the number of brood combs present in all participating colonies right before the treatment application was not significantly different (Kruskal-Wallis Test: H (21) = 2.95, P = 0.23) (P ≤ 0.05).

Looking at the number of brood frames present in the same colonies at the end of September 2021, the Oxybee-treated colonies contained significantly more brood frames compared with the other two groups (Kruskal-Wallis Test: H (14) = 9.83, P < 0.01) (P ≤ 0.05) (Figure 4).

The same is true for the number of frames covered by bees, which was estimated before and after the treatment period. Again, no difference between colonies was observed before trial onset (Kruskal-Wallis Test: H (21) = 5.63, P = 0.06) (P ≤ 0.05). At the end of September, months after the application of oxalic acid treatment in late July, the Oxybee-treated colonies contained significantly more bee combs compared with the other two groups (Kruskal-Wallis Test: H (14) = 10.29, P < 0.01) (P ≤ 0.05) (Figure 5)

Summarizing the results of this field test, it can be concluded that a single Oxybee application after queen caging in summer demonstrated an effective control of varroa mites without any significant negative impact on the colonies. Treatment with the other two oxalic acid-based products resulted in a significantly lower number of brood frames and frames covered with bees, later in the season (September, almost three months after treatment application). In the present study, three applications of VarroMed in the presence of capped brood were clearly insufficient to efficiently control varroa populations in the treated colonies. A treatment efficacy of at least 90% is considered efficient in the case of organic active ingredients.5

The results of the present field efficacy test confirm that repeated oxalic acid treatments during the season and with brood present in the colonies may not provide sufficient varroa control. This has been suggested before by peer-reviewed research papers from the United States.3-4 Brood-free colonies – whether naturally or artificially by intervention of the beekeeper – remain a crucial prerequisite for a successful oxalic acid treatment outcome.

Looking at the general difference in colony strength (frames of brood and frames covered with bees) between the Oxybee-group and the other two groups, this effect cannot be explained by a difference in treatment efficacy (alone), possibly resulting in a higher colony strength due to increased colony health after a successful treatment. Treatment efficacy was not significantly different between the Api-bioxal and Oxybee-treated groups. Possibly, other factors such as difference in oxalic acid concentration, or other differences in the formulation of the products, could explain the higher colony strength detected here, in the Oxybee-group. Oxybee is the only one of the three miticides tested here, containing glycerol and low-dosed essential oils – ingredients that have been observed to either support or directly contribute to increased varroa treatment efficacy.6-7

Whether or not these properties could have contributed to the increased average colony strength in the Oxybee-treated group, needs to be the subject of potential future investigations.

VarroMed 5 mg/ml + 44 mg/ml bee-hive dispersion for honey bees. Composition: Each ml contains 5ml of formic acid, 44mg of oxalic acid dihydrate. Indication(s) for use: Treatment of varroosis (Varroa destructor) in honey bee colonies with and without brood. Withdrawal period(s): Honey: zero days. Do not use during nectar flow. Special precautions: This veterinary medicinal product is irritating to the skin and eyes. Avoid contact with the skin, eyes and mucous membranes. Personal protective equipment consisting of protective clothing, acid-resistant gloves and glasses should be worn when handling the veterinary medicinal product. Marketing authorisation holder: BeeVital GmbH, Wiesenbergstraße 19 A-5164 Seeham, Austria.

API-Bioxal, 886 mg/g powder for in-hive use. Composition: Each g contains 886mg of oxalic acid. Indication(s) for use: Treatment of varroosis caused by Varroa destructor in honey bees (Apis mellifera). Withdrawal period(s): Honey: zero days. Do not treat hives with super in position or during honey flow. Special precautions: The product may be irritant to the skin, eyes and respiratory tract, or cause contact dermatitis. Avoid direct contact and inhalation of the product. When handling the powder (both during vaporisation and pre-treatment phases) wear a protective mask conforming to European standard EN149 (type FFP2), gloves and protective glasses. Marketing authorisation holder: Chemicals Laif S.P.A
Viale dell’Artigianato 13 – Vigonza (PD) 35010, Italy. 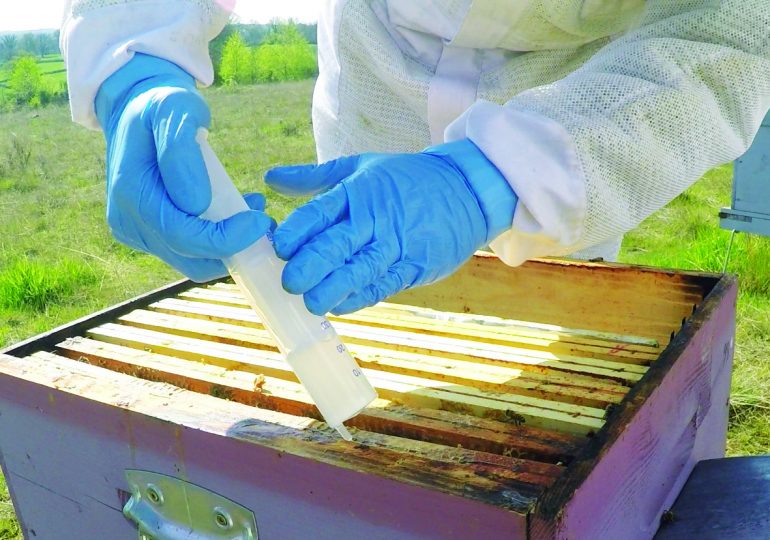 In the decades long fight against varroosis in honey bees, caused by Varroa destructor, oxalic acid has been suggested and investigated early on as an efficient active compound.

END_OF_DOCUMENT_TOKEN_TO_BE_REPLACED 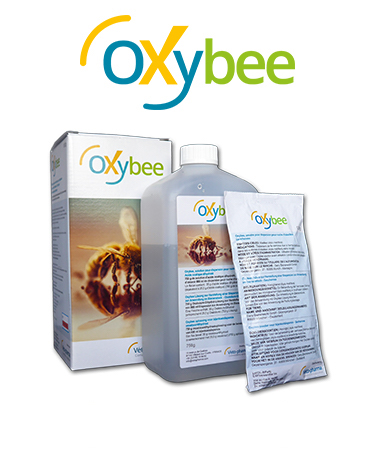