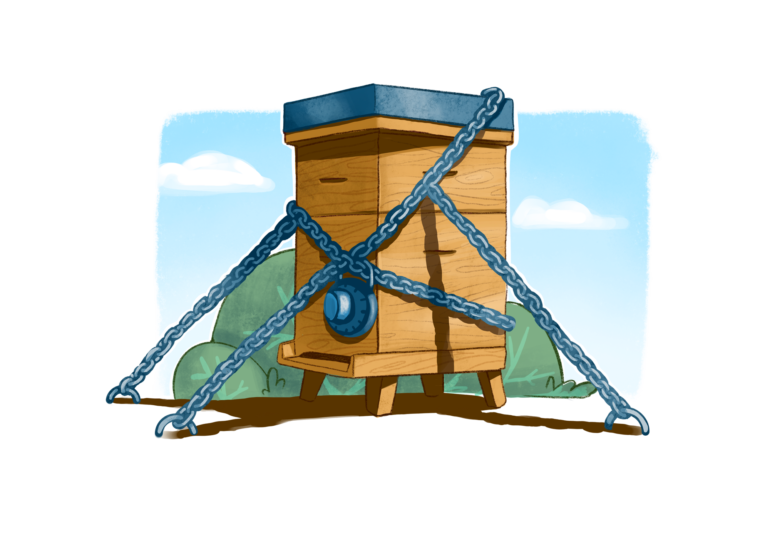 Hive thefts are becoming a more frequent occurrence. Hives, and sometimes even entire apiaries, are disappearing from all over France. Unusual just a few years ago, the phenomenon is becoming more widespread as bees become more scarce. A surge with dramatic consequences for the beekeepers affected, who are harmed both financially and psychologically. Afraid or tired of seeing their work reduced to nothing, beekeepers are turning to new technologies to protect their hives.

Well-established mechanics
Hive thefts are becoming more frequent, in correlation with the reduction in bee populations. Colonies are suffering sanitary attacks: varroa infestations, Asian hornet attacks, climate disturbances that disrupt workers’ habits… As a result, it’s getting harder to keep hives and swarms alive. Bee colonies are increasingly valuable, which has given rise to a parallel market of healthy swarms and queens.
At the beginning of the season, the most frequent occurrence is swarm theft. But throughout the beekeeping season, beekeepers’ production is also at risk of theft. Frames and honey supers can also be stolen.

A vicious circle
“Unfortunately, the thief is often a beekeeper who has suffered losses, and who wants to rebuild his colonies without reinvesting time or money,” says Maxime Mularz, who is developing a new geolocation solution to thwart these new criminals. “This creates a vicious circle. Beekeeping is becoming more difficult due to the increasingly challenging climate and sanitary conditions. Bee mortality is among the causes of theft. But these thefts present an additional obstacle to the work of beekeepers, who are put under additional pressure.”

Dramatic consequences
The economic impact for the beekeepers affected can be disastrous. The theft of a colony results in the loss of two seasons of beekeeping income, if you consider the time required to develop a strong, productive colony. In addition to the loss of income, the loss of a hive causes psychological suffering. It’s difficult to see months of work and care provided to the bees reduced to nothing.

What remedies are possible?
The beekeeper can file a complaint, which sometimes results in a trial for hive theft. But the investigations are complex. Bees have no identifying marks, so the theft is difficult to prove. As such, prevention is better than cure. Beekeepers can protect themselves in advance through the use of a GPS tracker that alerts the owner of the hive in case it moves and makes it possible to track the journey of a stolen hive.

B-Swarm: tracking hives
At Véto-pharma, we searched for an easy, practical and financially accessible way to help beekeepers protect their hives against theft. B-Swarm is a mini GPS sensor, very discreet, that communicates its position every 12 hours, and triggers an alarm whenever it’s moved. The movement detector informs the hive’s owner (by SMS or email). The B-Swarm interface makes it possible to view the hive’s location on a map in real-time.

Proven results
Last season, B-Swarm proved its effectiveness. A beekeeper in Eastern France was able to find his stolen hives thanks to the GPS location indicated by the application, with the help of the authorities. The data collected by the sensor made it possible for the beekeeper to seek justice and receive compensation. He reports that he now feels relieved and more secure. Maxime Mularz confirms, “As the application was developed, we added certain functionalities that enable the authorities to use the data provided by B-Swarm. Precise GPS coordinates are visible in real-time on the interface, and we now offer a satellite view in addition to the classic map view, which is very useful for law enforcement.” 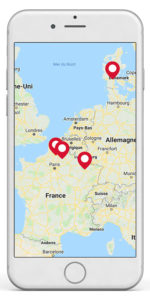 In practice
Hive thieves are often experienced beekeepers, who can easily spot valuable hives. We therefore recommend that you first equip your strongest hives and those located along the edges of the apiary (which are more accessible). The GPS tracker must be hidden in the hive. “We don’t recommend a precise location, in order to leave room for doubt.”

Hurry up, Véto-pharma is offering a 10% discount on all purchases of one or more B-Swarms with the code THANKSBSWARM10 (offer valid until August 11, 2019).

Before getting started, make sure to check the network coverage of the installation site via this dedicated page: https://coverage.hostabee.com 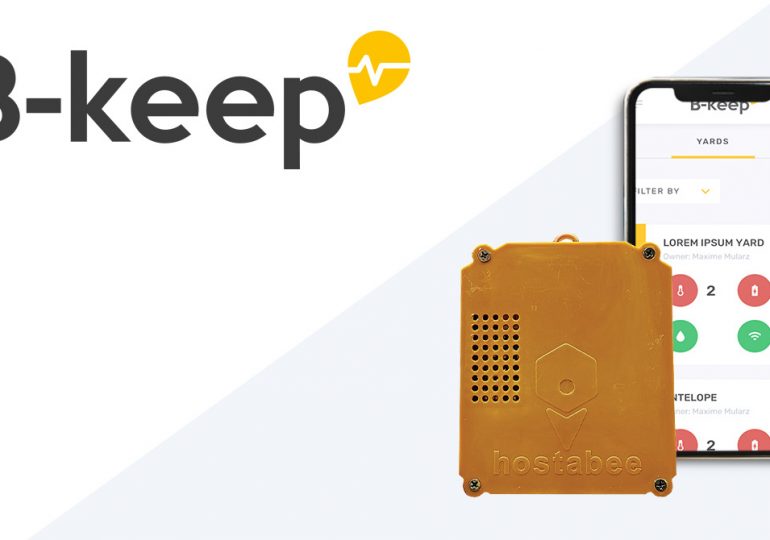 Hostabee, in partnership with Véto-pharma, is putting digital to work for bees. Using B-Keep sensors installed in their hives, beekeepers can remotely monitor the humidity levels and temperatures in their hives.